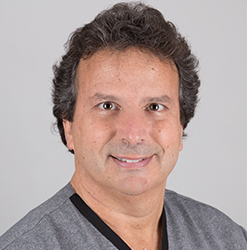 Dr Jonathan Lang was born, raised and now lives in Montreal. He received his Doctor of Dental Surgery degree from McGill University in 1986 followed by a one-year residency program at the Montreal General Hospital in 1987. Since then, he splits his time in private practice between Montreal and Greenfield Park.

Dr. Lang has been involved in all levels of organized dentistry locally, provincially and internationally. Since 1992, he has been involved with the annual provincial dental convention in the Province of Quebec, a meeting that attracts over 12,500 attendees from all over the world and has been their Assistant Executive Director since 2010.

A passionate advocate for community concerns, Dr. Lang ran and was elected to Council of his municipality, the Town of Mount Royal, to a 4-year mandate beginning in 2017.

Married since 1993, he is the proud father of two boys. As a sports' enthusiast, he has coached his boys in hockey and baseball. He founded and is Commissioner of the 6-team TMR Softball League since 2005.

For further information on your oral health, visit:

We are a member of the Ordre des dentistes du Québec: