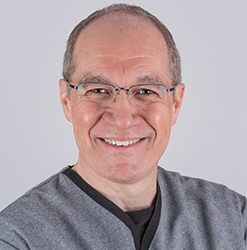 Dr. Sgro received his Bachelor's degree in Science (1980), his Master's degree in Physiology (1984) and a D.D.S. degree (1986) from McGill University. He subsequently did a one year multidisciplinary residency program at the Royal Victoria Hospital in Montreal.

Dr. Sgro has been active in organized dentistry throughout his career, holding positions on various committees of the Canadian Dental Association (CDA), the Order of Dentists of Quebec (ODQ) and the Quebec Dental Surgeons Association (ACDQ) and was president of the Montreal Dental Club (1995). He was a member of the Board of Administrators of the ACDQ and was elected to the executive committee in 2011. He was also a member of the organizing committee of the Journée Dentaires Internationals du Québec (JDIQ), the annual Montreal convention, for over 20 years.

Dr. Sgro was clinical instructor in the undergraduate clinic of the Faculty of Dentistry of McGill University (1994-1999) and in the residency program of the Queen Elizabeth Health Center (1999-2001)

He has been practicing general dentistry on the South Shore of Montreal for over 30 years and takes great pride in caring for his patients and their families.

For further information on your oral health, visit:

We are a member of the Ordre des dentistes du Québec: